5.  Purple Mountains – Purple Mountains:  The music world lost a lot of great musicians in 2019 including David Berman of Purple Mountains.  This was my first introduction to the man’s music and was touched by many of the lyrics contained here.  Knowing what happened to Berman soon after release makes some of the songs hard to listen to but this is part of his legacy that he passed on to us. Purple Mountains touches on many of the emotions we all feel from time to time and let’s us know we are not alone. This album will live on for a very long time.

4.  Robert Forster – Inferno:  Another long running musician that I was really hearing for the first time in 2019.  Ex of the much-loved Go-Betweens, Forster doesn’t sound dissimilar to Leonard Cohen and at times on tracks like “The Morning” and “Life Has Turned A Page” he offers much wisdom.  Like Cohen, Forster’s music is mature and on the cover he looks dapper as hell.  We can still aspire to be this cool.

3.  Vampire Weekend – Father Of The Bride:  This came out in May and was ready made for the summer. More complex musically than past releases and adding in a few cameos, most notably from Danielle Haim, this continues to increase the range of Vampire Weekend releases.  Many gems to be found here including “Sunflower”, “How Long”, and especially our song of the year – “Harmony Hall”.  Like most albums at 18 tracks long, there are a few that can be skipped but those are relatively few on an album that can be played on repeat for several hours.

2.  Lana Del Rey – Norman Fucking Rockwell!:  This album is getting lots of love even from people who don’t normally show it to Del Rey. Admittedly, the last few albums can be a bit hit and miss at times but this one never lags and distills the best of her sound onto 12 songs. “Venice Bitch” was a favourite from last year and “Mariners Apartment Complex” sounds like a movie in four minutes. “California” and “The Greatest” are timeless tracks that could have been released at any time in the last 40 years.  This is Lana Del Rey’s best album.

1.  Fontaines D.C. – Dogrel:  It’s not very often a straight up rock record gets us this excited but Dublin’s Fontaines D.C. delivered blow after blow on their debut.  It’s amazing that this literary band released poem collections before forming a band, as they seem ready made for the big stages in the UK. “Hurricane Laughter”, “Chequeless Reckless”, and “Boys In The Better Land” are a roar heard across the world as people keep falling for the band’s charms.  This is the best rock album we’ve heard in years.

Since we started following her career with the release of “Video Games”, Lana Del Rey has had her fair share of detractors. What people can’t say is that this artist is not putting in the work, Norman Fucking Rockwell! Is her sixth(!) studio album since 2010.  Released over a year ago, the first sounds most listeners heard from Rockwell was the nearly ten-minute single “Venice Bitch”.  It narrowly missed our top ten favourite tracks of 2018, the long song never drags and includes the lyrical earworm “bang bang kiss kiss”.  Released at the same time, “Mariners Apartment Complex” is one of the best here, commenting on helping a friend in their time of need with Del Rey relating “you lose your way, just take my hand”.

Many tracks here reference California including one named for the state that references Lennon/Ono that your personal war is over if you want it to be.  “Fuck I Love You” was the last track written for the album that says California is just a state of mind, your problems don’t leave you just because you’ve moved.  “The Next Best American Record” sounds the most like classic Del Rey and recalls the aforementioned “Video Games” in her lyrical inflections. “The Greatest” is a track that Amy Winehouse could have sung.  A classic sounding song with modern lyrics – “I’m wasted… the culture is lit and I had a ball”

Master producer Jack Antonoff co-produces many of the tracks with her but it’s Lana Del Rey that’s the master as she carries many songs with minimal accompaniment, some with just a spare piano and her voice. A few tracks in the middle could easily have been sung by any decent pop singer but songs like “Hope Is a Dangerous Thing for a Woman Like Me to Have – but I Have It” could only be done by Del Rey. Featuring several of her best songs, this may be her strongest set of music to date. 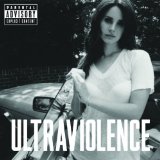 In 2012, Lana Del Rey shot to stardom (or maybe just infamy) off her first single, “Video Games”. From out of nowhere, everyone seemed to have an opinion on her. From Del Rey’s love it or hate it appearance on Saturday Night Live (I loved it), her much talked about past, a massive amount of remixes and a clutch of singles that eventually lead to very mixed reviews of her major label debut, Born To Die. Right from the start I loved the singles but stayed away from the debut after the reviews started to come out. I ended up buying Born To Die several months later and thought much of it was brilliant and as a whole, hung together quite well. Now Ms. Del Rey is back a sophomore effort, Ultraviolence.

There isn’t much variation throughout. The music is a bit 60s, a bit Portishead, a bit cinematic, etc. The vocals are all deadpan, played straight and without much feeling. The first third of the album, including the title track, all slip by without much notice. “Brooklyn Baby” doesn’t sound much different from what came before but what sets it apart is the lyrics and how they are sung – “you say I’m like the ice I freeze, I’m churning out novels like Beat poetry on amphetamines”, the one word Brooklyn accent in the second chorus, and the “da da da”s along to the guitar. Single “West Coast” follows and hits a bit harder both musically and vocally than anything else on the album before the beautifully lush chorus.

Lana Del Rey is not as good a singer as Adele and the music here isn’t anywhere near as classic sounding as say, Dusty in Memphis. Where Del Rey shines when her ultra-cool stories border on the ridiculous and are sung with a wink. It’s hard not to smile while listening to tracks like “Money Power and Glory”, “Fucked My Way To The Top” and especially bonus track “Florida Keys” where she’s slinging drugs in Miami. That’s the Del Rey that I like, far too cool and completely over the top, unfortunately there isn’t enough of that here. While Ultraviolence is ultimately not quite as consistent as Born To Die, there are still a handful of songs that shine and are ready made to be remixed over and over again.