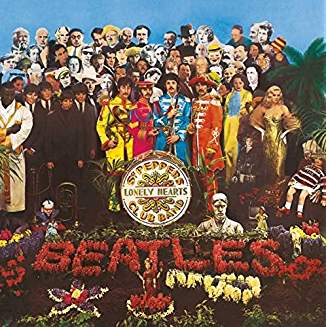 Enough has been written about Sgt Pepper’s Lonely Hearts Club Band that it could fill the Royal Albert Hall… and then some. 2017 was the 50th anniversary of arguably the most talked about album ever and as such, the deluxe editions were rolled out to celebrate. A six-disc super deluxe edition came out along with a 2CD deluxe edition. With the former trending close to $200, we opted for the latter. On this edition, the original album features a new stereo remix by Giles Martin and Sam Okell along with an extra disc of outtakes + extras.

The sound that Martin and Okell produce here is extraordinary and far exceeds the 2009 stereo remaster. The relatively simple “With A Little Help From My Friends” sounds expansive, like its growing from the middle outwards. “She’s Leaving Home” is warm and tender before “Being For The Benefit Of Mr Kite!” breaks in and somehow sounds louder. Never really a favourite of mine, this version sounds downright menacing and surreal. One of our favourite album tracks, “Good Morning” gets a rollicking version and Paul’s countdown in “Sgt Pepper’s (Reprise)” is as thrilling as ever. It’s amazing to think that even after the embarrassment of riches preceding it, one of the greatest songs ever in “A Day in The Life” closes out the album.

Oftentimes with these types of releases, the disc of extras may get listened to a few times before being filed away. Here, the extra disc is an absolute joy from beginning to end. “With A Little Help From My Friends” appears in an instrumental that does not sound too dissimilar to the theme song from Welcome Back, Kotter. “Lucy In the Sky with Diamonds (Take 1)” is missing the chorus but it’s nearly impossible not to sing along to the empty space. There is a rawness to some of the recordings “Lovely Rita (Take 9)” and elegance to others “She’s Leaving Home (Take 1 – Instrumental)”. “Within You/Without You (Take 1 – Indian Instruments)” carries on from Revolver’s “Love You To” however in instrumental form it can start to drag. At the end of the day, it is a fascinating listen to some of the most talented musicians ever working through some of the greatest songs ever. The inclusion of “Strawberry Fields Forever” and “Penny Lane” in both stereo remixes and outtake form makes this an absolute essential purchase for fans of The Beatles either in this deluxe edition or the super deluxe.