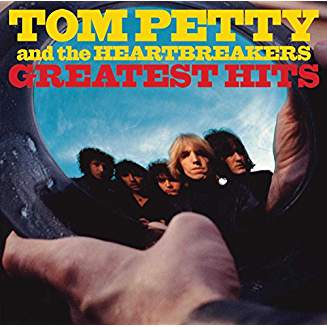 On October 2nd, 2017 the world was saddened to learn that American rocker Tom Petty had passed away due to an accidental overdose of prescription pain medication. The surprising news came as Petty and the Heartbreakers had just wrapped up tour of the US that ended a week before his death. In recent years there have been two remastered vinyl box sets released of the band’s music but none of this on CD. With the first set hovering in the $300 range, to tide us over before investigating the early Petty records to add to our meagre Petty collection, we instead opted for the more economical Greatest Hits set.

Comprised of 18 tracks, the Greatest Hits runs in chronological order and covers all the major singles from 1976 to 1993. First half highlights include “American Girl”, “Refugee”, and “Don’t Do Me Like That” with “Don’t Come Around Here No More”, “I Won’t Back Down”, “Into the Great Wide Open” and “Mary Jane’s Last Dance” appearing in the second half. “Stop Draggin’ My Heart Around” sung with Stevie Nicks is a welcome addition to the original track listing and appears as the last track. The set also features lesser hits like “Here Comes My Girl” with it’s cascading piano in the chorus, the synth driven “You Got Lucky” and “The Waiting” whose chorus has been lodged in this writer’s head for days.

This remastered version was released in 2008 and while I’m not an audiophile by any stretch, the sound can be a bit tinny with not much in the way of bottom end. Musically, if there is any knock on it, the album at times suffers from over familiarity. Listen to any rock station in North America, a lot of these songs will appear within a few hours. It’s the sound most of us have heard throughout our lives and has been the soundtrack to high school proms, long car rides, days at the beach and drinking beers on patios. As noted many times at his death, Tom Petty was beloved by all. Leaving a lot to still discover in his back catalogue as well as latter day tracks not represented here, Tom Petty and The Heartbreakers’ Greatest Hits is a brilliant introduction to many of the band’s best tracks.