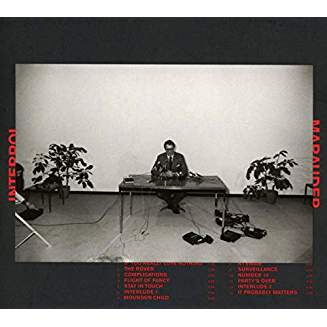 When starting the review for the latest album from New York band Interpol, I was surprised that it was their sixth. Produced by Dave Friedmann (Flaming Lips, Mercury Rev, etc), the band will always be stuck on their fourth album in my mind.  Turn On the Bright Lights released in 2002 is a perfect distillation of their sound with second album Antics an excellent follow-up. Three more albums followed with varying degrees of success.

Two dense rock songs start the disc off including first single “The Rover”.  Where it starts to feel like an Interpol record is “Stay In Touch” where the guitars lock in to a familiar band sound and Sam Fogarino’s drum work on the snare/hi hat really drives the song home.  The low rumble of “Mountain Child” is next followed by “Nysmaw” where Daniel Kessler’s and Paul Bank’s guitars perfectly lock-in with Fogarino.  A shimmering guitar starts off third single “Number 10” that feels airlifted right of the debut before the band crashes in.  Last track “It Probably Matters” starts with the lyric “I tried to be a faithful man…” with Paul Banks doing his best Kings of Leon vocal impression.

The band works best when there is air in the songs to help expand the flames but at times that gets suffocated by dense rawk songs (both of the first tracks have been released as singles).  As noted elsewhere, Interpol is one of the few bands from the ‘Meet Me in the Bathroom’ era that has turned into a legacy act.  This has the knock-on effect of needing those rawk tracks for their live show to get the early evening crowd revved up in between the classics.  Interpol are in that rarified position of having perfected their sound on the first album and are stuck having to live up to that.  On Marauder they do a good job of adding some different touches to their sound and proving there is still life left in those well-tailored black suits.