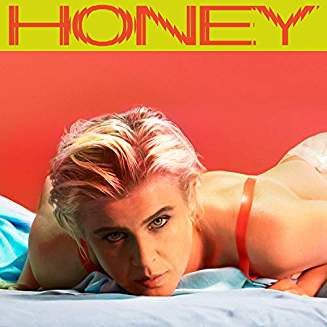 Honey marks the full length recording return of Robyn, the first since 2010’s compilation Body Talk. Title song “Honey” appeared in the final season of HBO’s Girls.  Like first official single, “Missing U”, this is perfect futuristic pop music.  Robyn has said that she spent more time on “Missing U” than any other tracks she’s ever recorded and it shows.  The lyrics are heartfelt and the music sparkles with electricity

“Baby Forgive Me” begs for forgiveness while riding a slinky bass groove while “Because It’s In the Music” sounds like a lost Daft Punk track.  Album closer “Ever Again” is mid-tempo 80s R+B before it turns into a synth rave.  The best tracks are front loaded, towards the end “Beack2K20” is more of a interlude than song but continues for long five minutes and the house-y “Between the Lines” is less than essential.  At nine tracks Honey is more often than not very good and at its best is peerless.