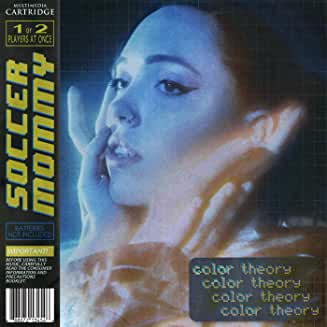 On Sophia Allison’s Wikipedia page for her last album under the Soccer Mommy moniker, Clean, there is a lengthy list of year end lists that it appeared on. Two years later, Allison has released the follow-up Color Theory. Several tracks document her Mom’s battle with cancer including the heartbreaking last track “gray” and the seven minute “yellow is the color of her eyes”. The latter is the longest track here and has Allison declare that “loving you isn’t enough”.  The track expresses emotions through metaphors with drums that suddenly open up to become expansive.

Several of the songs have an emo tinge and are not lyrically much different than several of the emo rappers that are currently popular. The electric/acoustic guitars of “circle the drain” sounds like it could have been released at any time in the last 30 years where Allison sings that she feels low sometimes even when everything is fine. “night swimming” sees Allison trying to figure out a relationship with a distant partner. Opener “bloodstream” is that moment childhood gives way to adulthood and you don’t recognize the person staring back at you in the mirror. Produced by Gabe Wax, there is a slickness to the Soccer Mommy recording that could be a younger version of Kacey Musgraves who loves indie pop rock and also explores the many emotions of being a young adult.