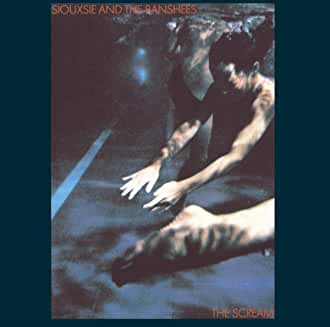 Siouxsie Sioux and Steven Severin met in 1975 and went on to form Siouxsie and the Banshees, debuting a year later at the 100 Club Punk Festival with Sid Vicious on drums. With Siouxsie handling vocal duties and Severin on bass, the duo would later add guitarist John McKay and Kenny Morris on drums. The band’s first release was the Steve Lillywhite produced single “Hong Kong Garden”. One of the landmark releases of the punk era peaked at #7 in the UK singles chart. A few months later in November of 1978, the band released their debut album, The Scream, also produced by Lillywhite.

First track “Pure” features a spare guitar with disembodied voices before one of the album’s finest songs “Jigsaw Feeling” ups the ante with a stunning mix of punk, metal, industrial and goth while Siouxsie sings of “My eyes are doing summersaults/staring at my shoe”. The staccato vocals of “Carcass” and hard guitar edge do little to hide the pop melody including handclaps. Ending side A, the band reaches back a decade earlier for inspiration in a powerful cover of The Beatles “Helter Skelter” climaxing with Siouxsie exclaiming, “you may be a lover but you ain’t no fucking dancer!” before a cymbal crash brings it all to an end.

The only track from here to appear on the Once Upon a Time:  The Singles compilation is “Mirage”. The accelerated track is driven by an acoustic guitar where Siouxsie’s “limbs are like palm trees/swaying in the breeze”. In stark contrast, “Metal Postcard (Mitageisen)” is cold and militant. Having originated in the London suburb of Bromley, “Suburban Relapse” revisits life outside the capital centre where the character suddenly snaps while doing the mundane chores, the music ups the tension throughout. The album closes with the ambitious “Switch” where Siouxsie sounds like Grace Slick and the music changes on virtually every verse over it’s nearly seven minutes.

The music that young Londoners created in the late 70s known as punk still reverberates throughout the music industry as new generations keep finding it. Siouxsie and the Banshee’s debut that was released just one year after the Sex Pistols is already moving the sound in new directions. Morris’ drumming is a highlight throughout, along with Severin they create a solid base for McKay’s guitar to shine. Siouxsie is a true icon who’s voice here already sounds developed. The Scream is a true classic album of the late 1970s.