For the past few years my reading of books has been off/on at best.  Read two books in a row then nothing for a few months before starting up again.  In 2018 I vowed to change that with a goal of reading a book a month.  Not exactly a stretch target but one to keep me going.  I’ve been posting on Instagram as I finish each one but wanted to post here as well.  I have not written about books in the past as my literary knowledge is good but limited. Instead of trying to write a few paragraphs every month, I decided to write quarterly about the three books I read.  Here is the first installment…

Annie Proulx’s 1993 novel The Shipping News won the Pulitzer Price for fiction in 1994. The story tells of Quoyle who moves back Newfoundland with his two daughters and aunt after his wife leaves him. His family was from the area of Killick-Claw area but his parents had emigrated to New York state many years before. Reviews for the book veer from “masterpiece” to “rubbish”. I fall somewhere in the middle but closer to the latter. While Proulx paints a vivid picture of Newfoundland, I never fully connected with the characters and had to push myself through it. 6/10 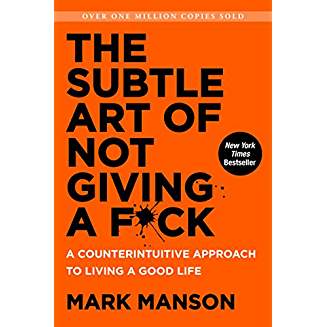 Mark Manson released The Subtle Art of Not Giving a F*** in the fall of 2016 and since then has sold millions and the author has gained many followers. There are moments in the first few sections of the book where “f***” gets used quite a bit and grows rather tiresome but once that gives way, there are plenty of good life lessons revealed. A lot can be boiled down to “don’t sweat the small stuff” and don’t run away from your problems. Face them, tackle them, then trade up to more important problems. You only get so many f***s to give in life so choose wisely. Excellent book that I look forward to reading again in the near future. 9/10

The Rosie Project is the debut from Australian writer Graeme Simsion that has sold a few million copies since being published in 2013. The novel follows the plight of professor Don Tillman trying to find a wife who fits his rigid criteria when he meets the less than perfect Rosie and decides to help her find out who her real father is. Simsion keeps this romcom of a book moving along swiftly with many funny moments that has the reader rooting for Don and Rosie to get together. A movie has been in the works with directors/actors coming and going for a few years now, hopefully it sees the light of day soon. 7.5/10